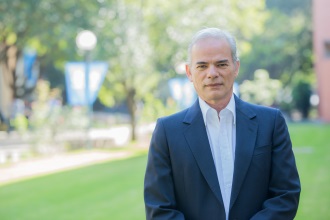 He was a partner and general administrator of La Casa del Niño from 1989 to 1995. He served as project advisor for the Alternative Rarámuri Education Project "Biniwami Rarámuri Niwara" at CENAMI from August of 1993 to June of 1996. He held several positions at the Instituto de Ciencias between 1996 and 2003, including Planning and Finance Coordinator, Administrative Director and Secretary of the Rector's Office.